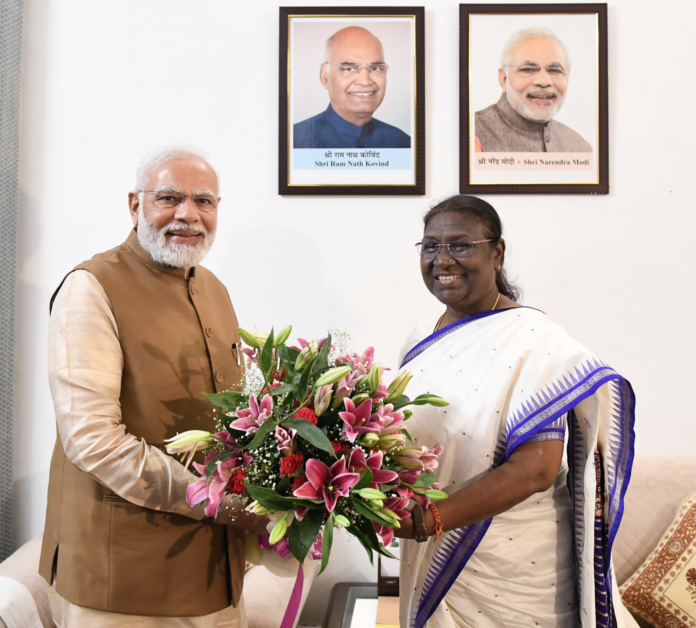 A lady from a tribal community becomes the youngest President of India, the whole Odisha celebrates…

Draupadi Murmu decided to join politics in view of politics and the social situation. In 1997, the elections were to be held for the councillors of Rairangpur Nagar Panchayat, they decided to contest.

She contested the election of councillor and was elected as a councillor for the first time in Rairangpur Nagar Panchayat in 1997. With this victory, she started her political career. By being a parliamentary member.

She became a member of the BJP in the state of Odisha. With this, she served as the Vice President of the Scheduled Tribes Front of the Bhartiya Janata Party.

She became an MLA twice on a BJP ticket in 2000 and 2009 from the Rairangpur Assembly seat in the Mayurbhanj district of Odisha. In Odisha, she was also made a minister in the Naveen Patnaik government of the BJP-Biju Janata Dal alliance.

From 6 March 2000 to 6 August 2002, he held the post of Minister of State (Independent Charge) of the Department of Transport and Commerce.

From August 6, 2002, to May 16, 2004, she was appointed as the Minister of State for Fisheries and Animal Resource Development.

From 2006 to 2009, she held the responsibility of the state president of the BJP’s Scheduled Tribes Front.

From 2002 to 2009, she served as the national executive general secretary of the BJP’s Scheduled Tribes Morcha of Mayurbhanj and made the BJP strong in Odisha.

From 2013 to April 2015, the Scheduled Tribes Front was a national executive member of the BJP. The previous facts about India’s presidents

Dr. Rajendra Prasad holds the record for winning the presidency with the most votes. In 1957, 99.3% of the votes were cast in his favour. At the same time, V.V. Giri has been the president who won by the narrowest margin of votes. There were 50.2 percent votes in favour and 48.7 percent against them.

Since independence, 14 presidents have been elected in the country. There are 12 of them who have completed their terms. Dr. Rajendra Prasad has two records to his name. First, he was the country’s first president in india. Second, he was elected president of the country for the second time in a row. This has not happened again in history.

Neelam Reddy was the only president of the country to be elected unopposed. In the 1977 elections, 37 candidates, including Neelam Sanjiva Reddy, had filed their nominations, but 36 candidates were rejected for different reasons. Thus, in the end, it was Neelam Reddy who was elected unopposed. However, during the election, 756 MPs of the country and MLAs in the legislative assemblies of several states did not take part in the voting.

Just as Ranil Wickremesinghe was the acting president in Sri Lanka for a few days, chief justice Mohammed Hidayatullah took over as acting president for 35 days in 1969 after the death of former president Zakir Hussain in India.

A president is responsible for all the bills, schemes, Changes, and rules passed into the parliament. One has to work with all the responsibilities and also needs to be capable to raise the voice against the odds, against the wrong, Draupadi Marmu has been known for speaking for their people, also it’s going to be hard to question government policies. However, the previous president also hasn’t done much to raise their voice but as the highest delight of the country, it becomes your responsibility to speak for the people. She defeated Yashwant Sinha, who was a representative of congress.